An early rise this morning out of the tent and into a hot cup of campsite espresso. I made my way into Red Lodge, gassed up, and went looking for the armory that was to be our starting point. As early as I'd come down, there were still four folks there before me. We had a great time talking bikes, enjoying the warm sun, and sharing stories of other rides we'd done.

As the hour approached, more and more folks showed up, topping out at 76 participants. With a few words from our organizer and our police escort, we were off! 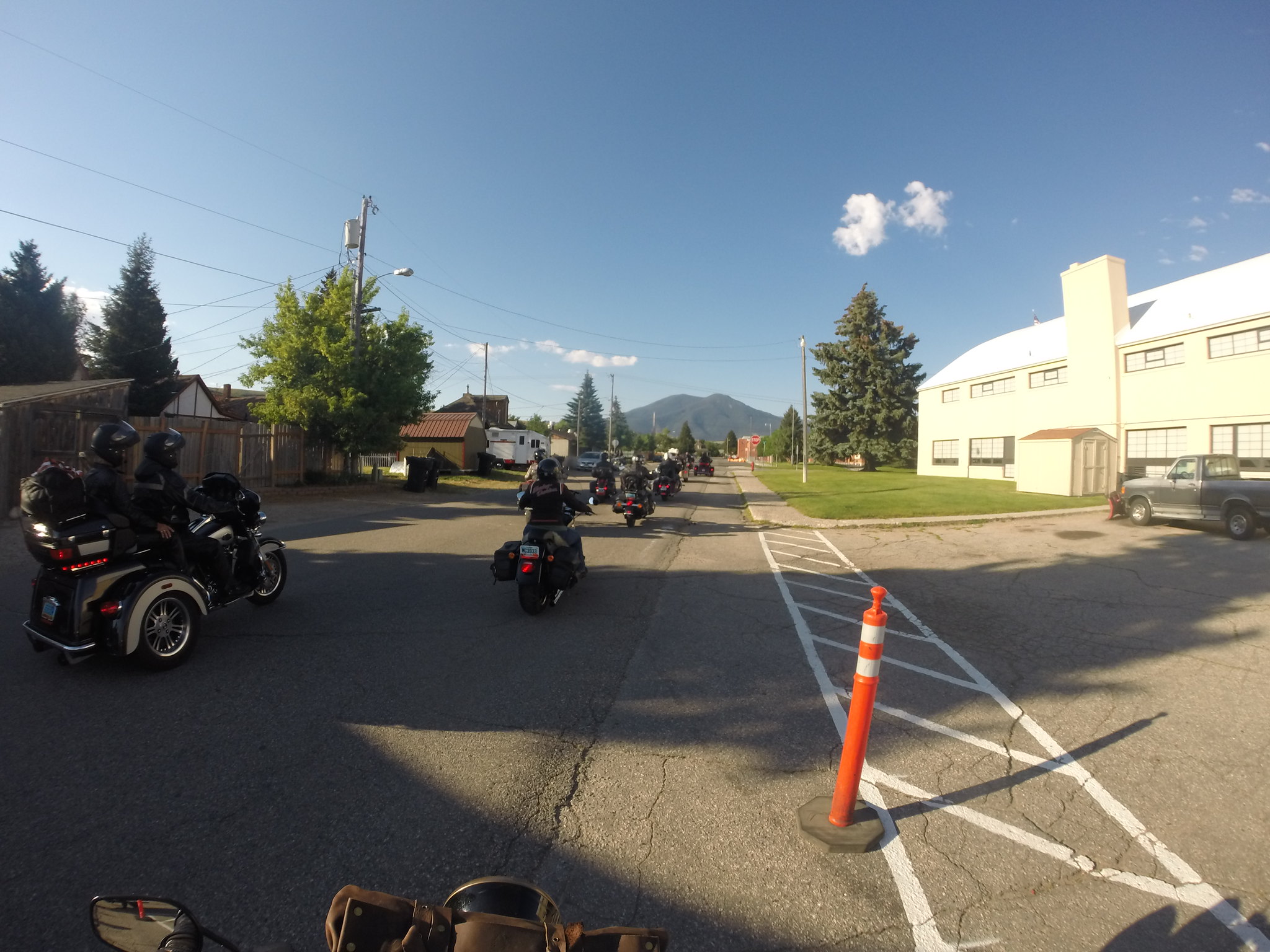 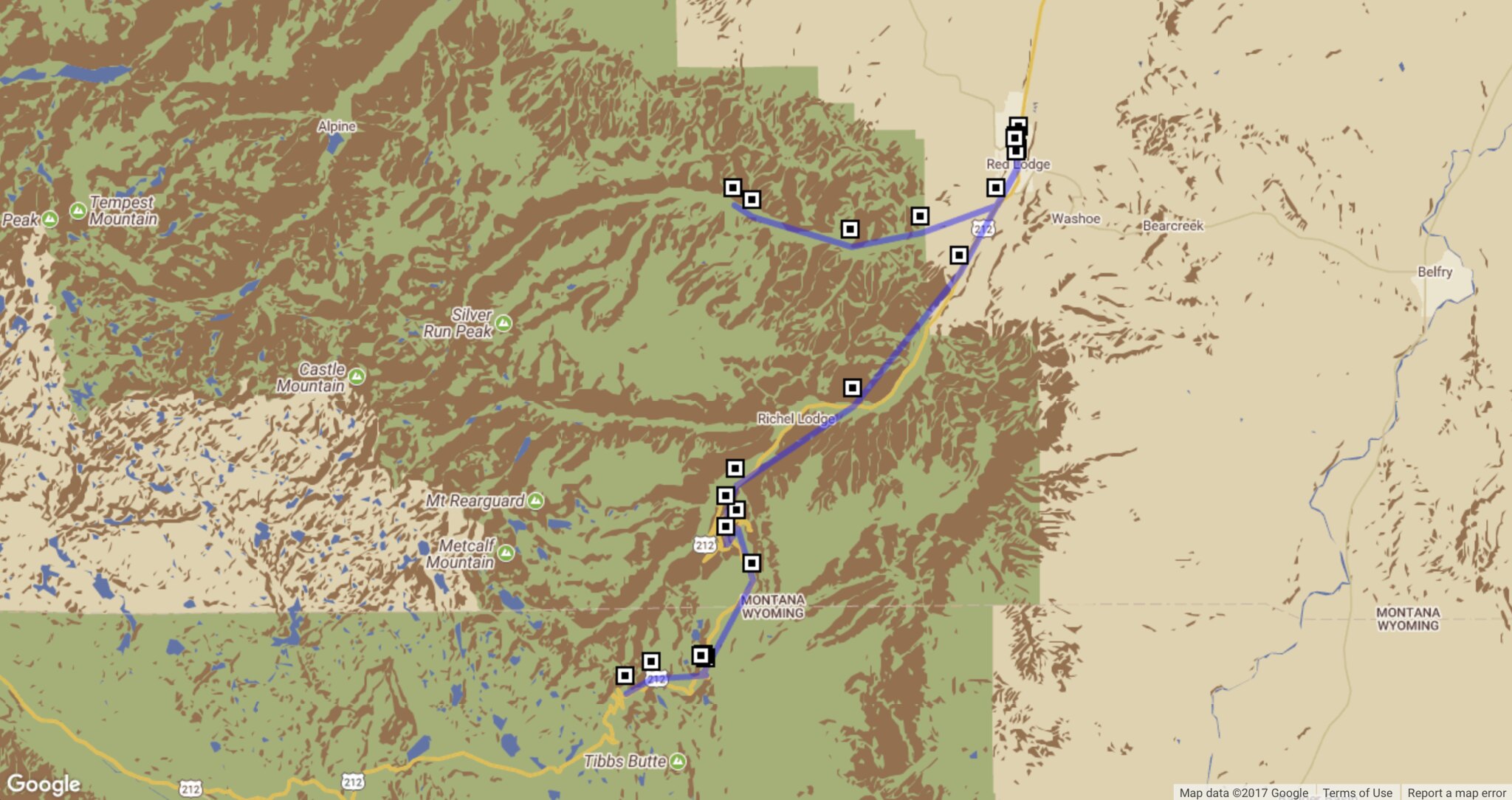 Soon we were out of town and on our way up to the summit: 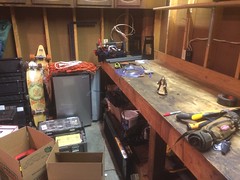 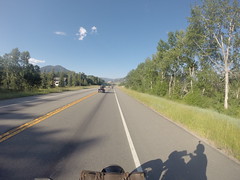 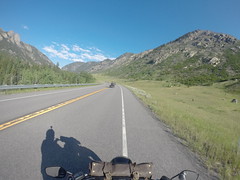 We started to hit some gentle hairpins, but were still catching some phenomenal views in the morning sun: 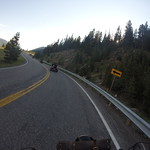 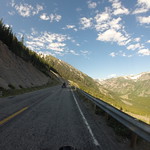 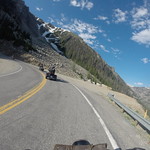 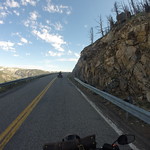 In no time at all, we were at the half-way point: 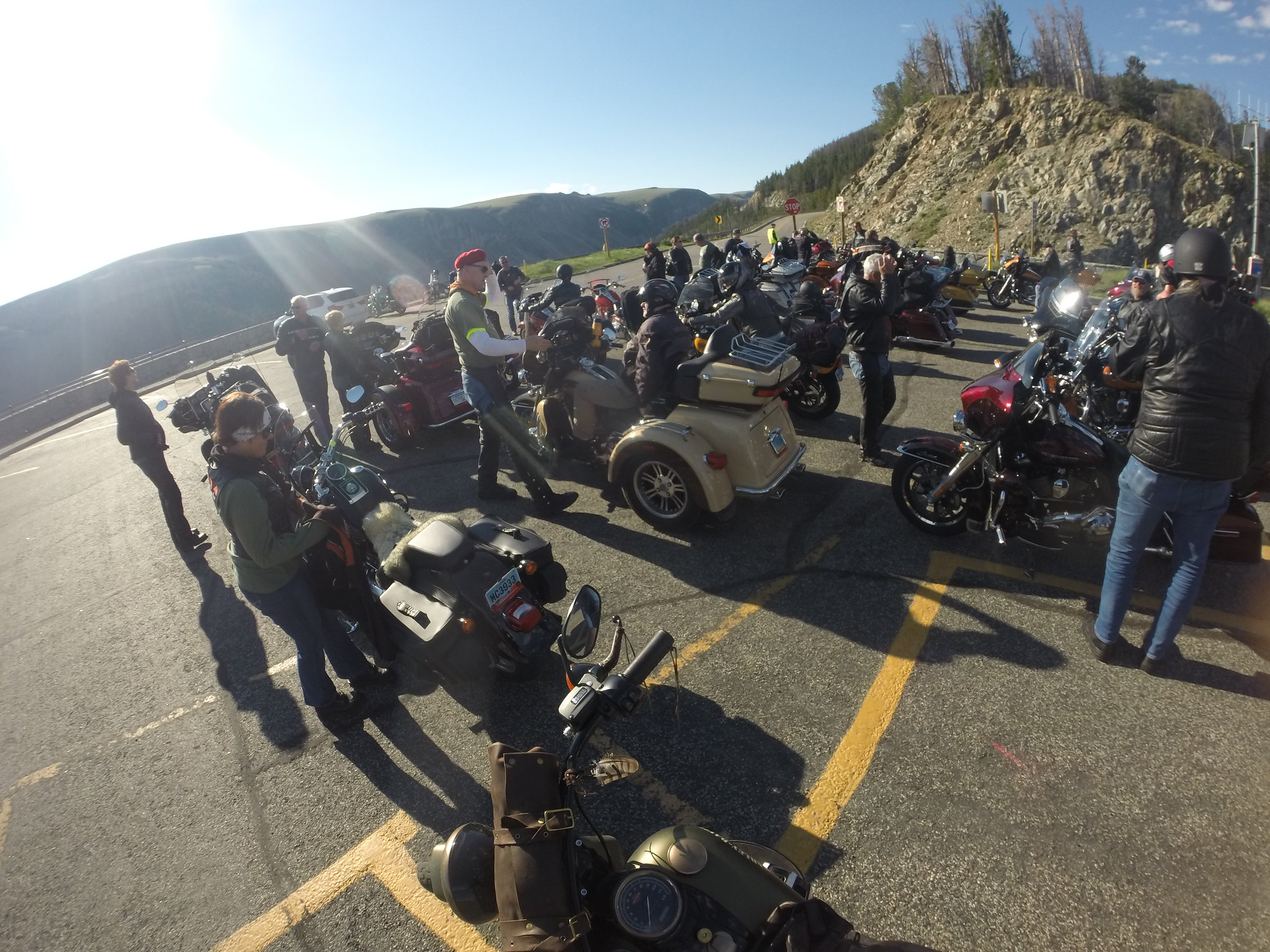 There, breakfast was waiting for us (served by the good folks at Red Lodge Pizza Co.), lost more good conversation was had, and more pictures were taken. Here's a panorama of the valley we'd passed on the way up:

Here's a topo map that shows this stop (Roadside Park) ... and some GPS points: 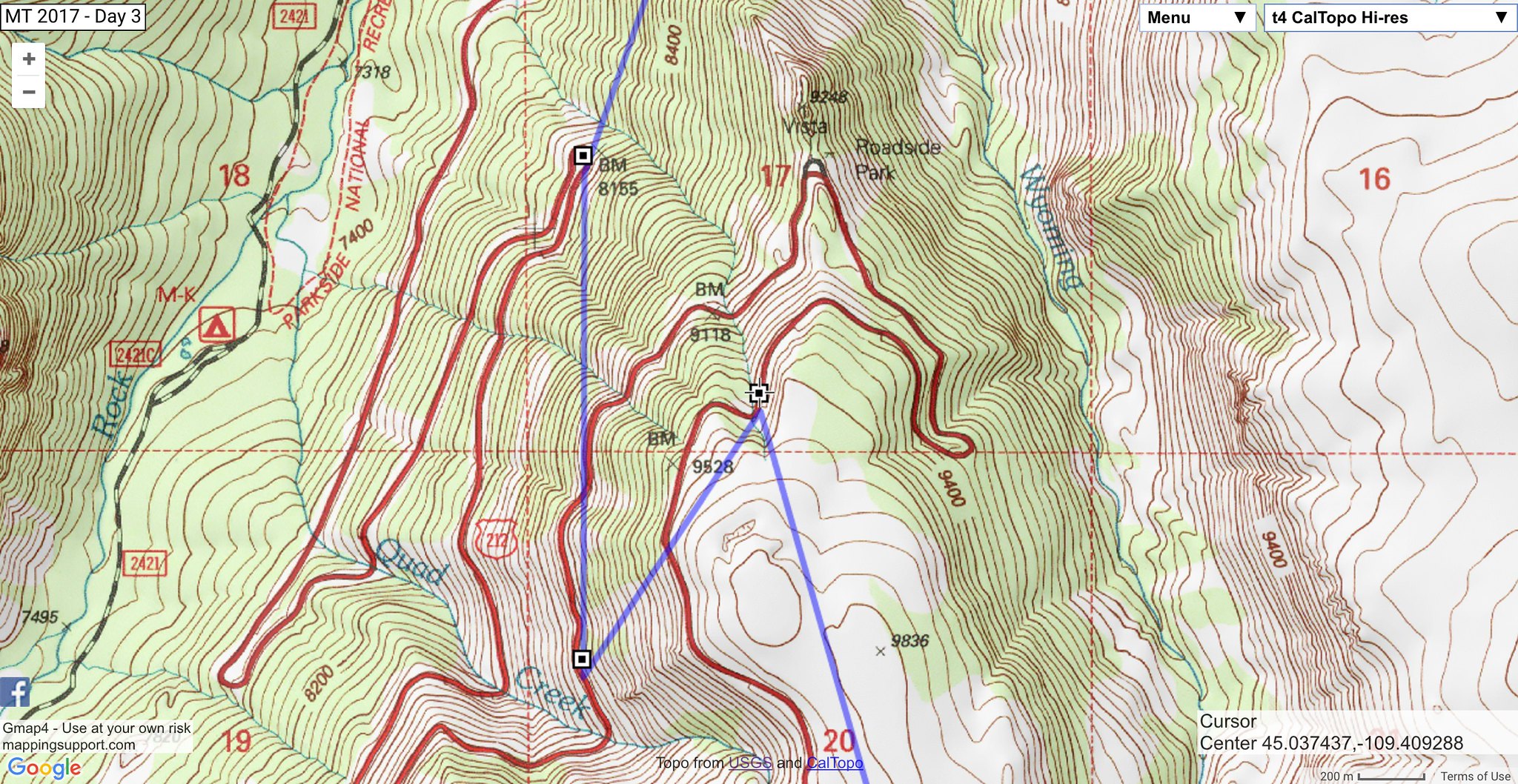 Eventually, the roar or two of a v-twin could be heard, as the first groups got back on 212 and headed for the pass. 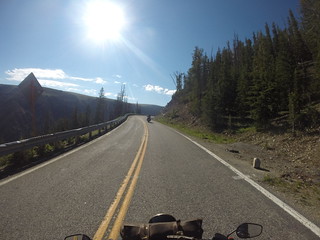 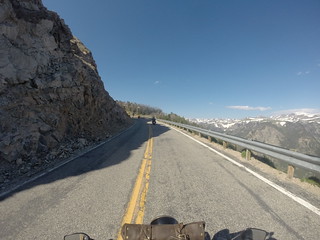 I used to live next door to Rocky Mountain National Pass, and went riding in the Rockies last fall. I miss the altitude, the views, and the summer snow :-) So I was delighted as we crossed into the tundra biome and then got our first glimpses of snow: 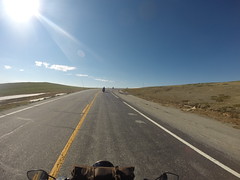 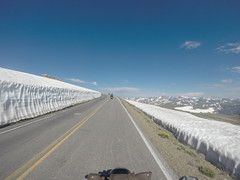 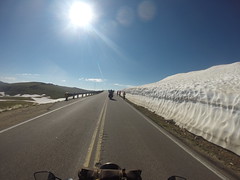 Turns out there was a race up there today, too – so the road was quite busy! 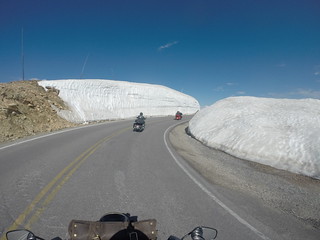 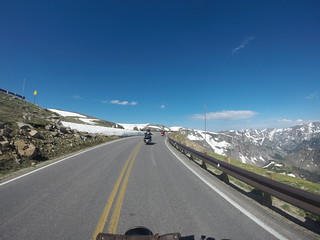 Turning into the parking lot of the overlook, we were met with a mud and ice surprise – always lots of fun (no, seriously: it's a LOT of fun): 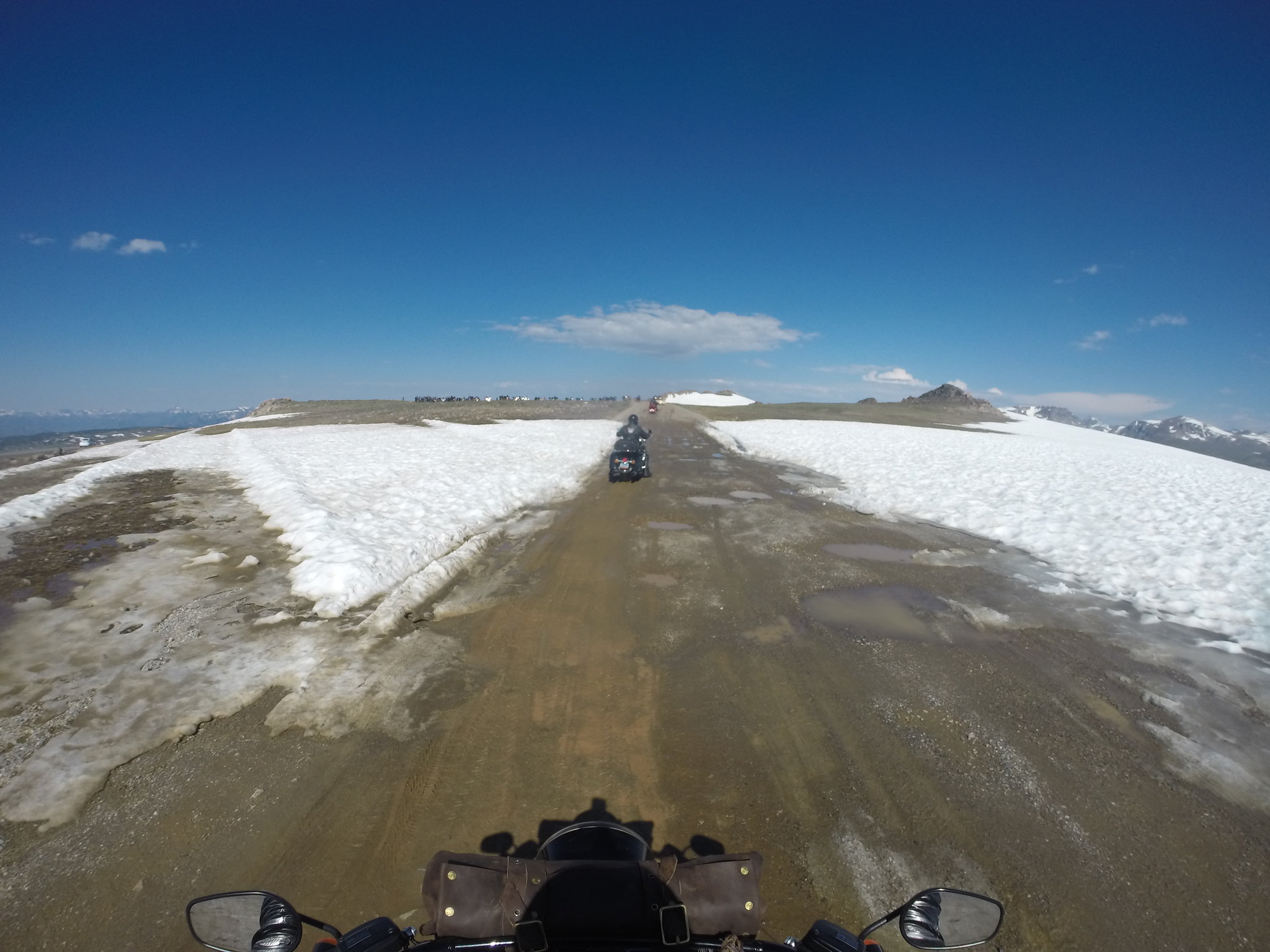 Once off the bikes, more panoramas ensued:

The person who ended up taking our picture was a German naturalist, visiting to photograph Montana alpine and tundra wildflowers. He was quite delighted we asked him to take our picture, and received a T-shirt from the group to remember us by. He also took pictures of us with his own camera, saying they would be published when he returned home.

Here's a topo of the Roadside Park at the summit: 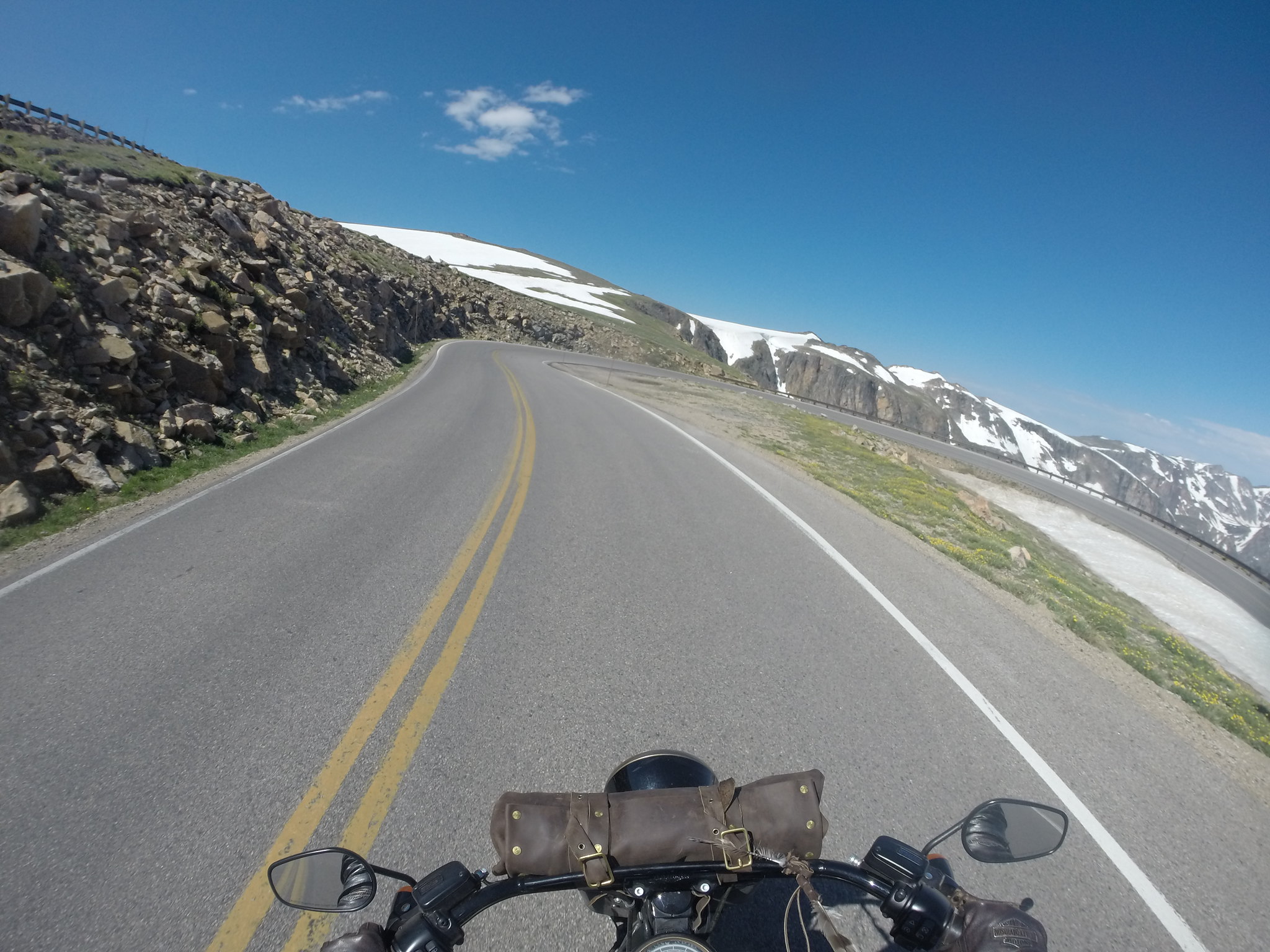 I missed the group, but the turns were even more fun this time around :-) It also gave me a chance to stop and grab some shots of some of the things I'd missed on the way up: 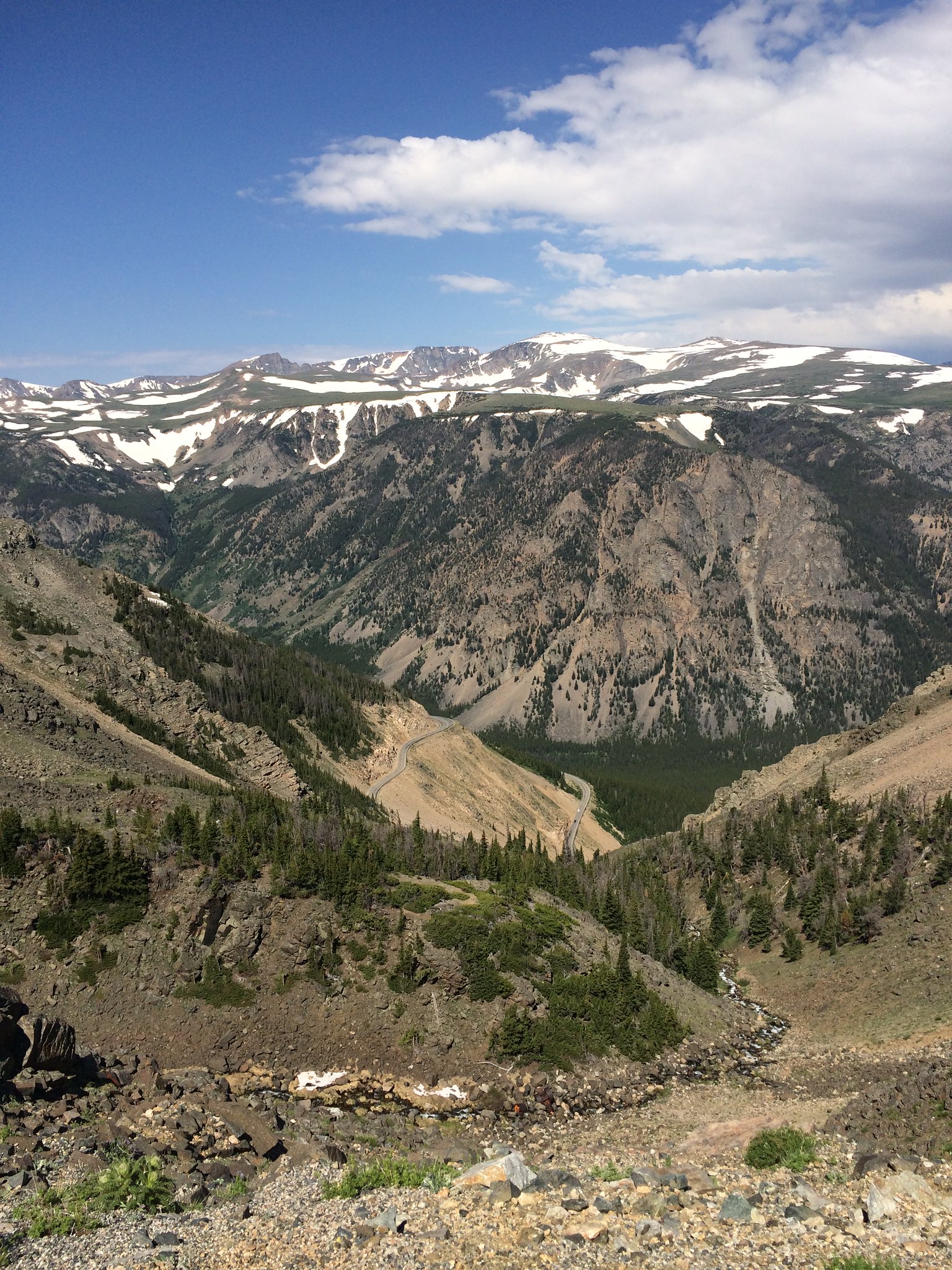 In one of the pull-offs, I saw a Triumph all decked out, so I pulled over and ended up having a really long chat with its rider. He's a local who comes up to the mountains to ride all the time. He shared a big chunk of his recent life story, including possible plans of packing up and traveling around the U.S., looking for new territory and good rides. I wished him well, and continued down the mountain. 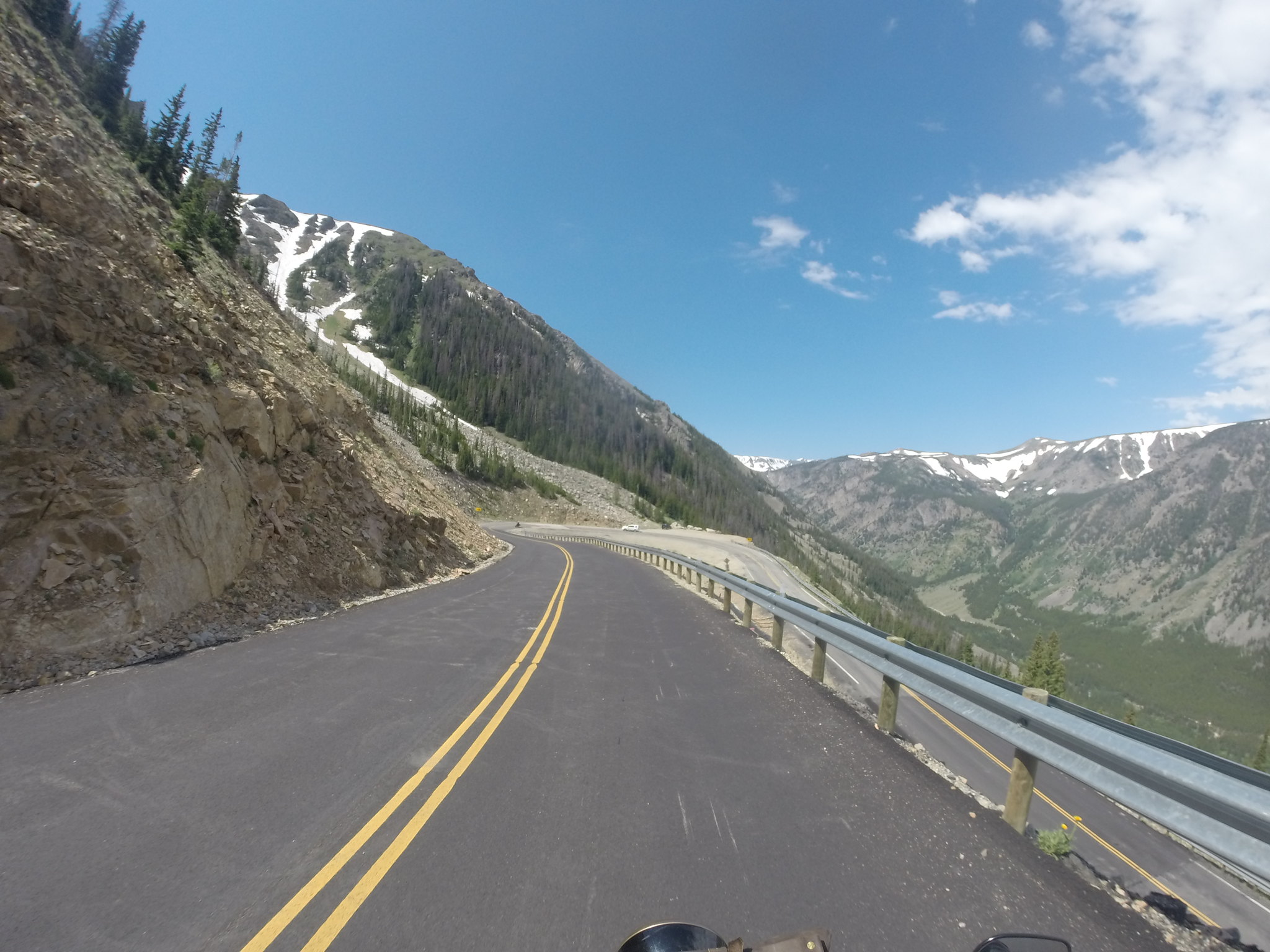 After getting off the bike, I was delighted to see the evidence of the day's adventures written all over the read fender :-) 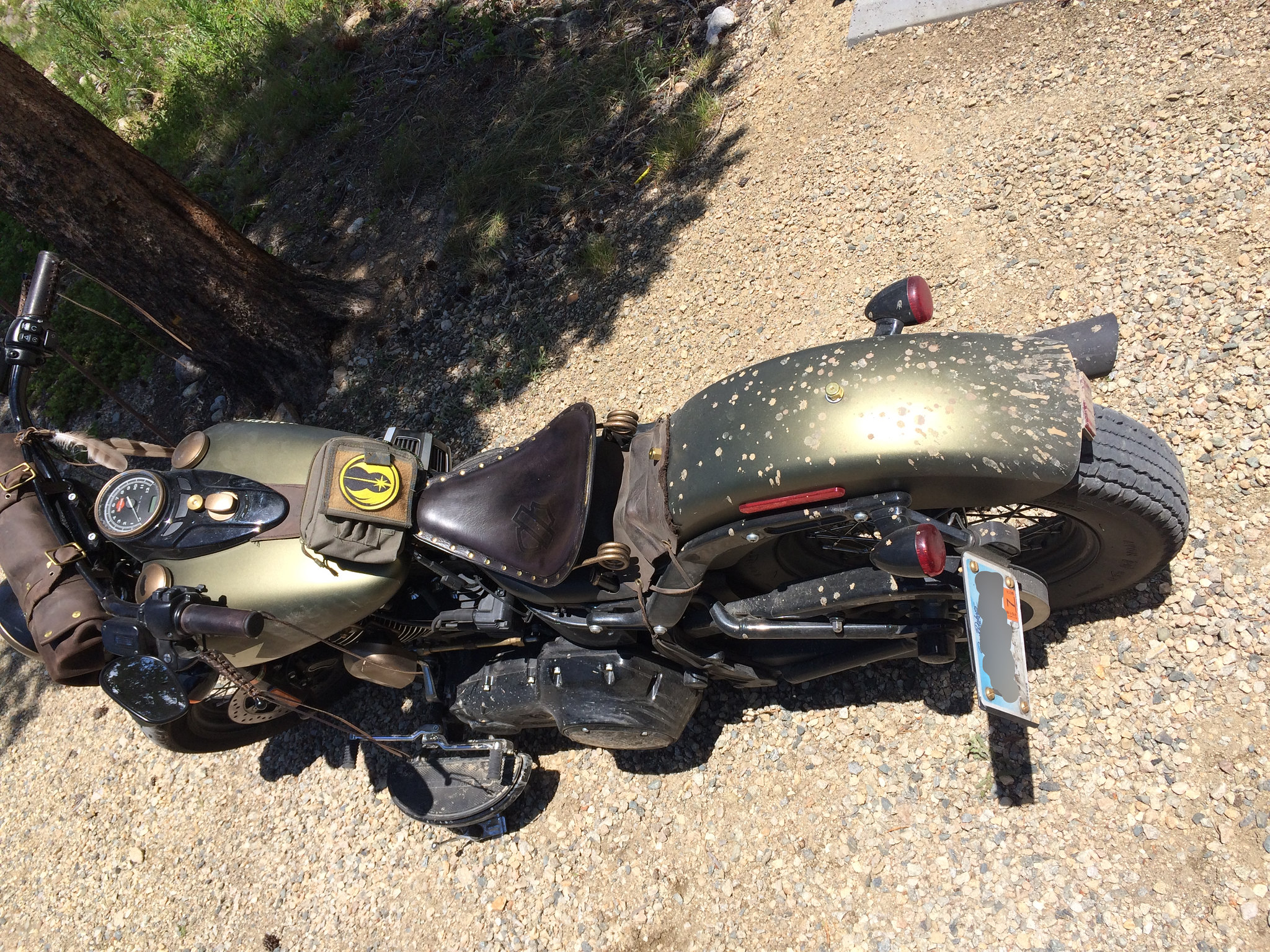 The next thing I needed was to set up the site with Rory and then get some hammock time ... 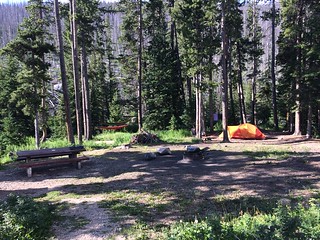 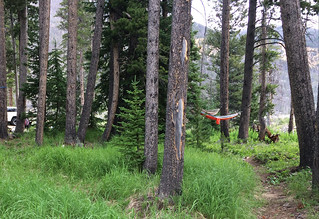 ... so I could relax and watch the river we'd camped next to: 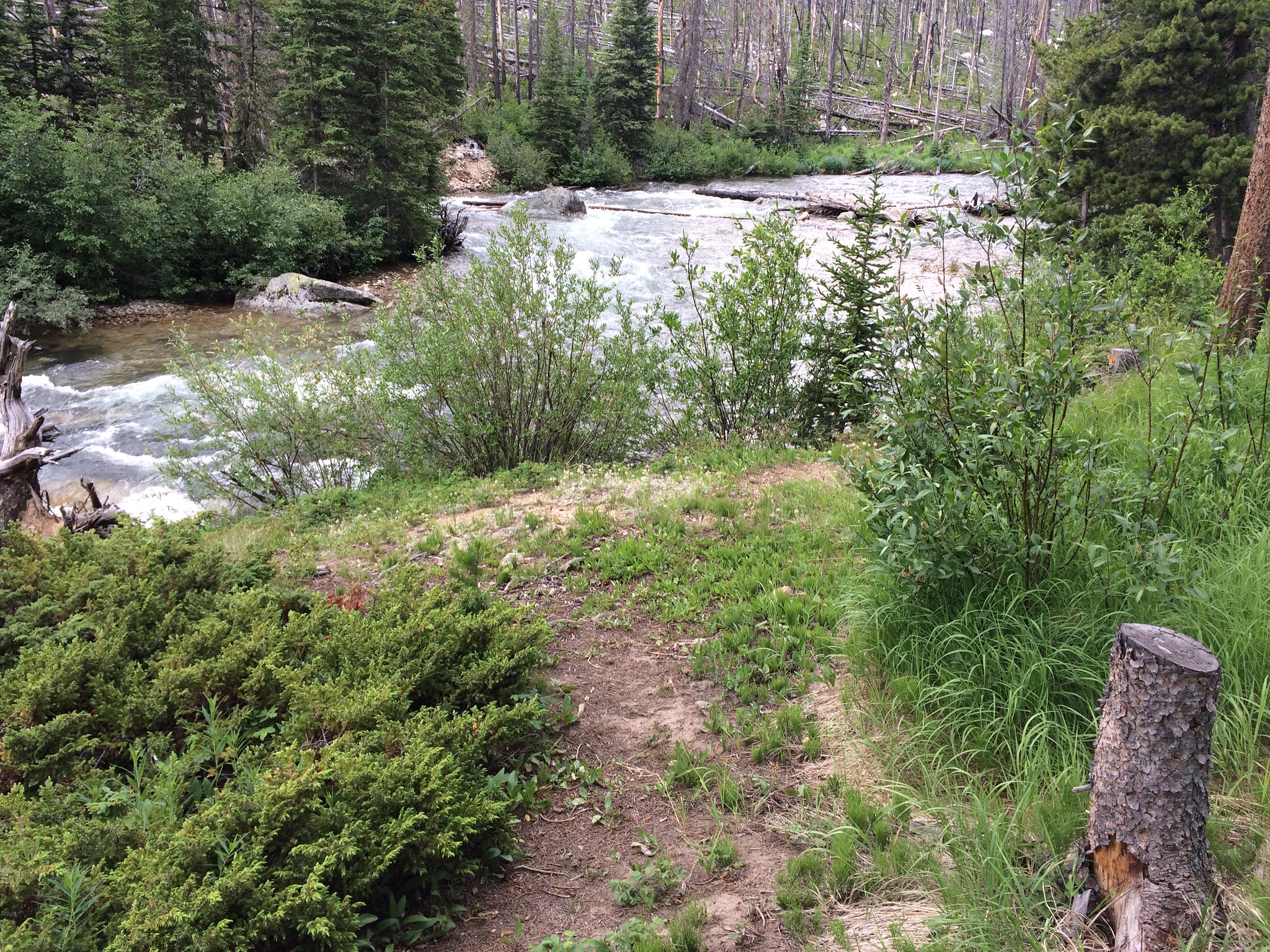 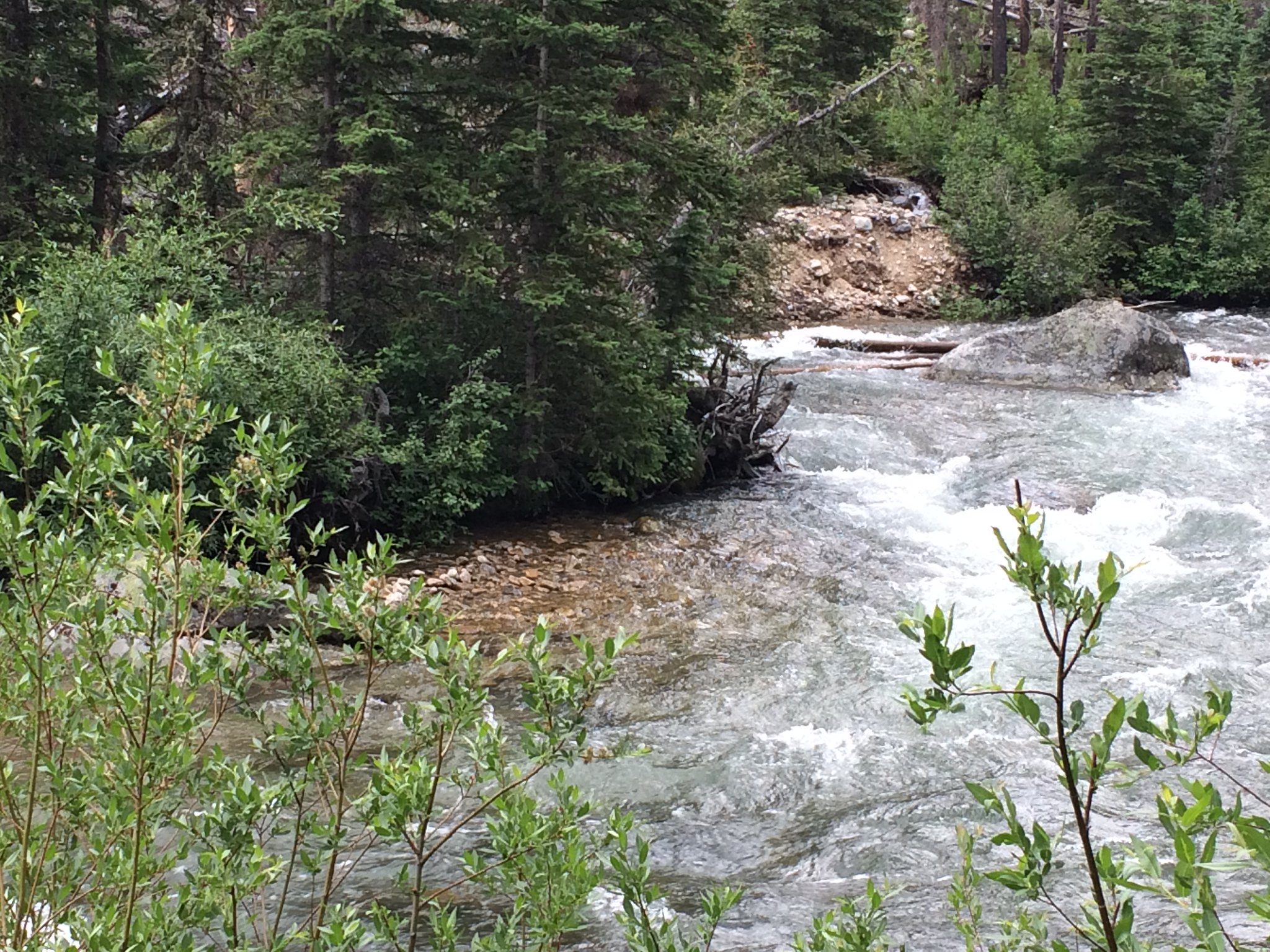