Since the last post about the FRMX move, we've been pretty busy with the relocation and settling-in process, with barely any time to write an update. With the riding reason over, and most of the unpacking done, that's slowly starting to change. Now that I've started tackling the old garage in the alley, I've definitely got something to write about – this will definitely keep me busy until the 2018 riding reason starts up!

The last day of riding for me was the day we closed on the house in Minnesota: it was a bitterly cold, very windy, three-hour ride from Sioux Falls to just outside New Ulm; I'm just glad we had the walk-through before going to closing – gave me a chance to learn how to talk and walk again!

The bike had a few more happy minutes in the sun, and then was rolled into the main garage, where it's been ever since: 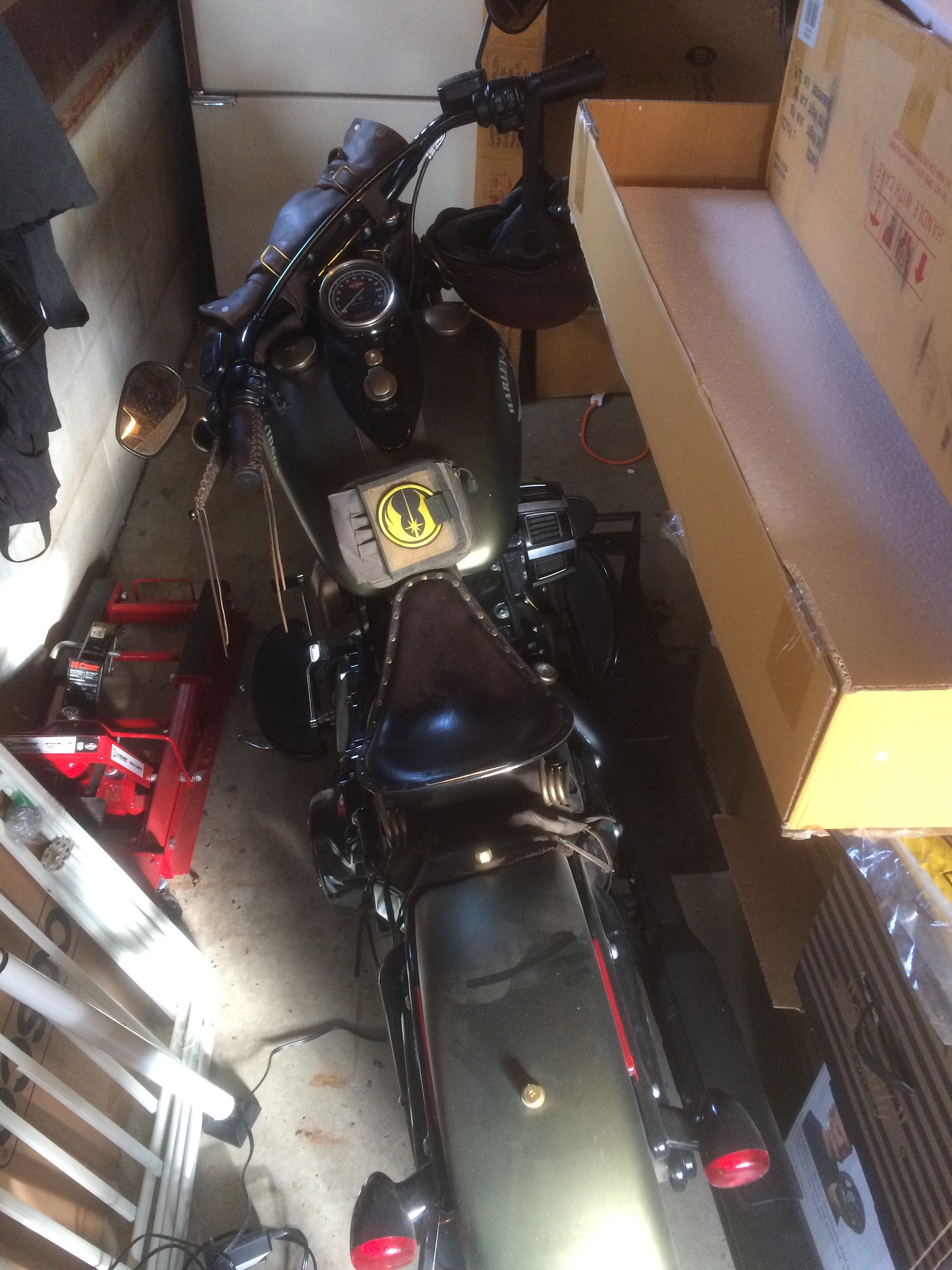 A few days later, the movers showed up and the boxes just started piling up around the old warhorse. The most action its seen since then was when I moved it back a foot so I could stock the beer fridge in the garage :-)

The future home for the bikes is not here, though, but at the other end of the lot in the alley garage. It's a bit of a mess and needs work before the bikes get moved in. The biggest problem is that there were feral cats living in it before we bought the place, and they used two different corners for dedicated cat latrines. It's going to take a lot of commercial-grade enzyme cleaner and Killz to get rid of the smell ... however shoveling out the old cat shit was a good first step :-/

It was also unbelievably dusty in there, so the next steps were organizing was had been moved into the garage, and then giving it a good spring-cleaning-in-late-autumn.

The garage is just over 100 years old, and I really wish I'd remembered to take a picture of the attic before my enthusiasm had chucked 99% of its contents to the floor (half of which rolled out the door!) ... I did get one or two shots of part of the resulting mess, though: 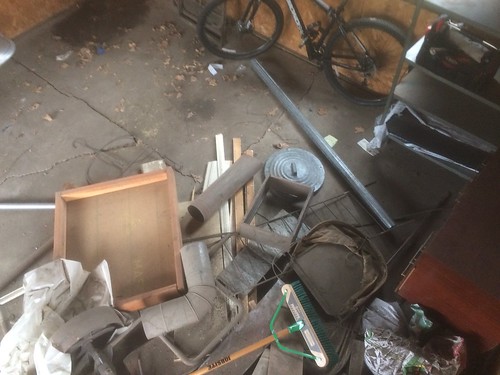 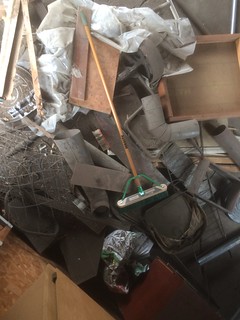 I didn't trust my weight to the old boards that form the attic floor, so I did my best to pull what seemed to be about 80-70 years worth of accumulated dirt and dust toward me and down the opening (which subsequently formed a dark grey dust cloud over the neighborhood). 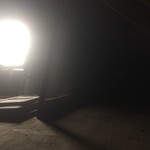 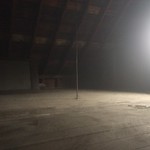 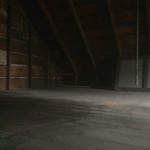 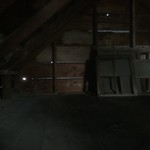 About two hours before those picture were taken, you couldn't see any of the opposite walls from that position. Would love to do a super-thorough cleaning up there ... and then have some fun making that a workable space, but that's a job for much later down the road.

Most of what was thrown to the floor ended up in the local landfill yesterday, but there were some nifty bits of junk and old parts that I wanted to hang on to (I'll probably hang it from the walls at some point). I think I found what used to be part of a set of wood-working vises as well as a tractor axle and associated gears: 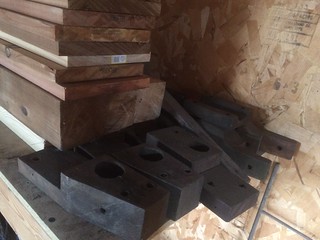 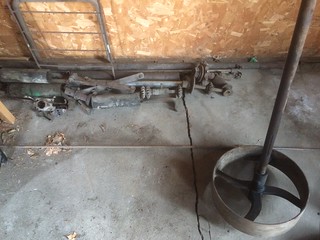 My favourite is the tractor axle; pretty sure I'm going to turn that into a coat tree for next to the door :-)

After clearing room for the saw horses and then making a run to Menard's for pegboard and hooks, it was time to start getting the first of several tool-hanging areas setup: 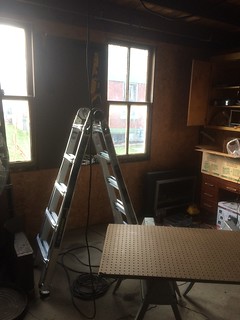 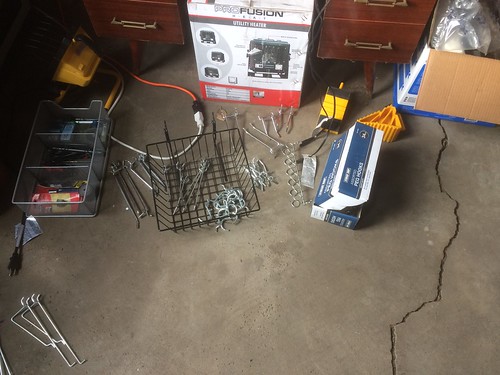 There's an old 60s-era desk that came with the place that will be a stand-in until I can make the 2x4 laminate workbenches I'll need: 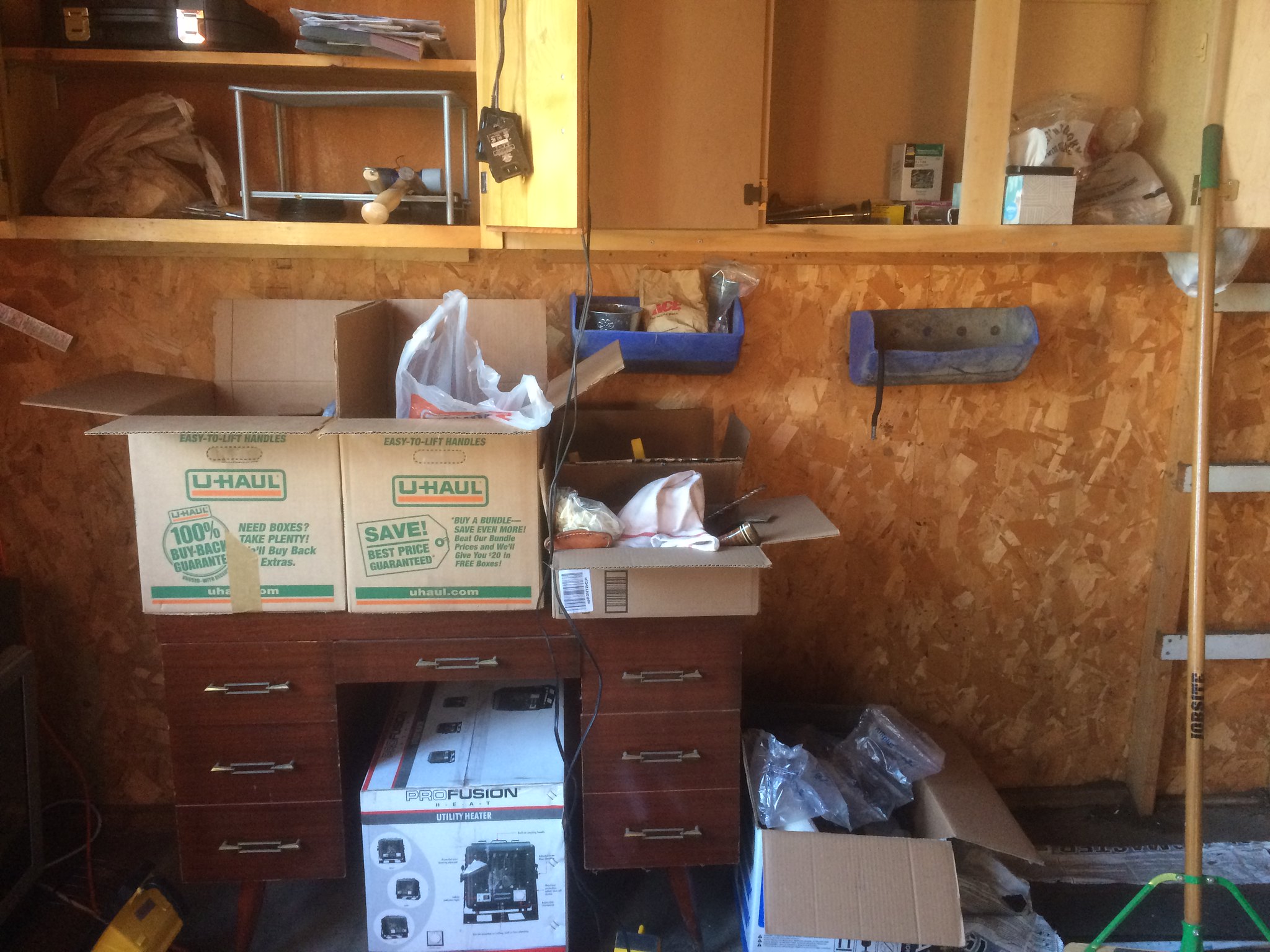 The cupboards will be useful ... but a bit low for my 6'3" height, so I'll probably re-hang those. The floor's in rough shape, too; that'll need to be addressed: 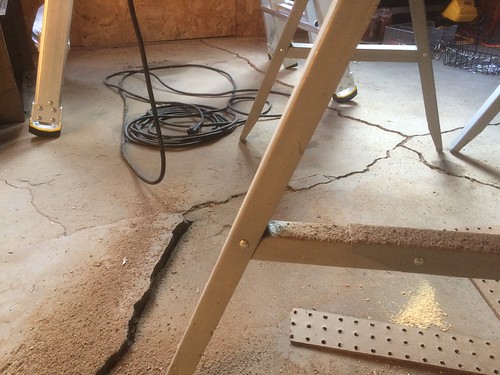 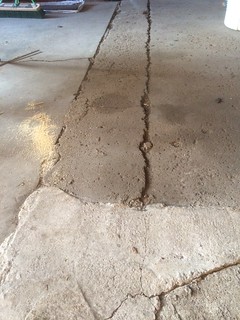 Before I roll the bikes in there, there's a lot more work to do:

Then it will be ready for bikes. After that comes the tasks to get it ready for bench work:

Once the welding gets into gear, I'll need to add some ventilation, so that's on the list. At that point, though, it may be time to build an extension for the garage to accommodate a steel welding bench, tanks, etc. 🛣