Lessons Learned When Packing a Cruiser for Touring

Last year was my first year of riding, and at the end of the season I took a 3,600 mile trip. Due to a family emergency, I was in a hurry to leave, and as such, barely had time to pack much less figure out how to do this well with a bike set up for cruising and not touring. In the weeks after my return and then over the winter, I spent many an hour looking at bags online, coming up with different arrangements for the bike, packing and re-packing in my mind. This first trip this year gave me a chance to get out of my head and put some of that to the test. Though it was only a 1,000 mile ride, it was still a good test.

How Not To Do It

Before the solution, though, let's look at the problem :-) 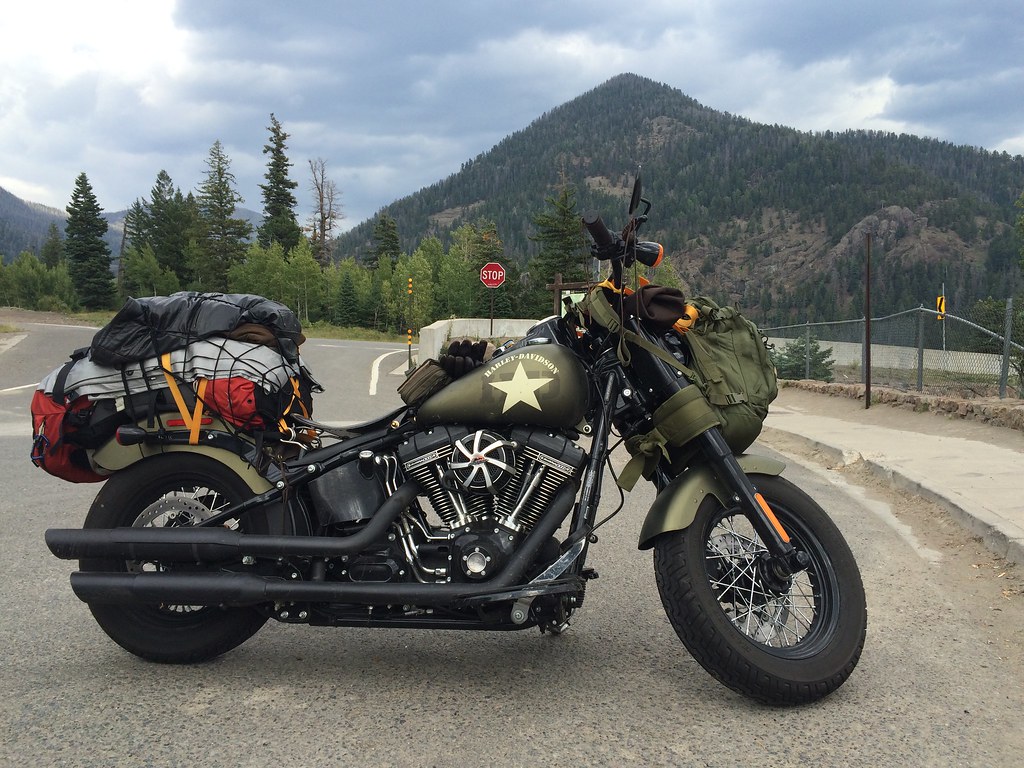 That's a shot from when I'd made it over the Rockies and was preparing to head down into Durango, CO and on into Arizona and Utah. As you can see, I didn't have much to work with: a backpack strapped illegally across the front headlight, a 5300 cu in mountaineering pack lashed to the rear fender, a large tarp, a tent, rain gear, clothes, etc.

The headlight melted the back of the one pack, but it's still quite usable (except for the hydration pouch in the very back!). For the return trip, I stacked it up on the rear fender with everything else, but then got another smaller bag to put on the front fender for miscellaneous easy-access items: 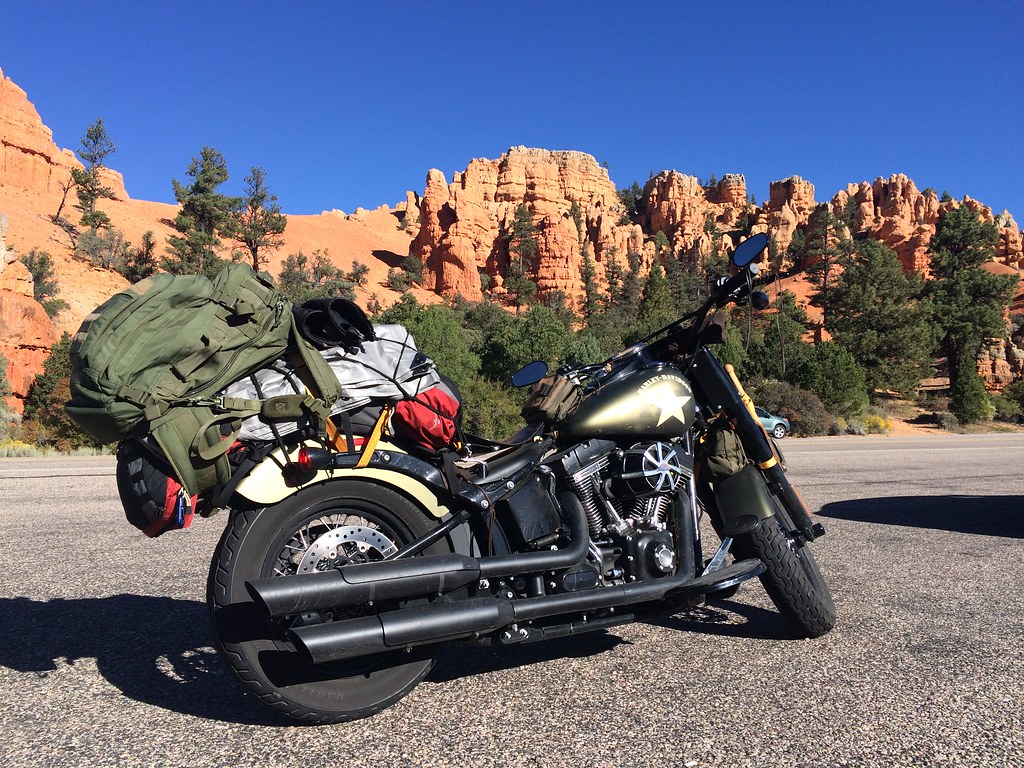 It doesn't take too much imagination to put a kitchen sink at the top of that pile ... yet the odd bags weren't the biggest problem: the fact that they were essentially woven to the fenders was. Access to the tent, the air pad, the lined Carhartt pants (I was riding in below-freezing weather in the mountains) required undoing the whole thing. There were times during the trip when I simply slept on the gravel or forest floor with the tarp thrown over me because it was too much trouble to unstrap everything ...

At the end of the trip, I did give in at a particularly nice camping spot: I unpacked everything. Doing so was such a luxury, it almost felt like I'd gone to a hotel. However, repacking it all in the morning took me about an hour. 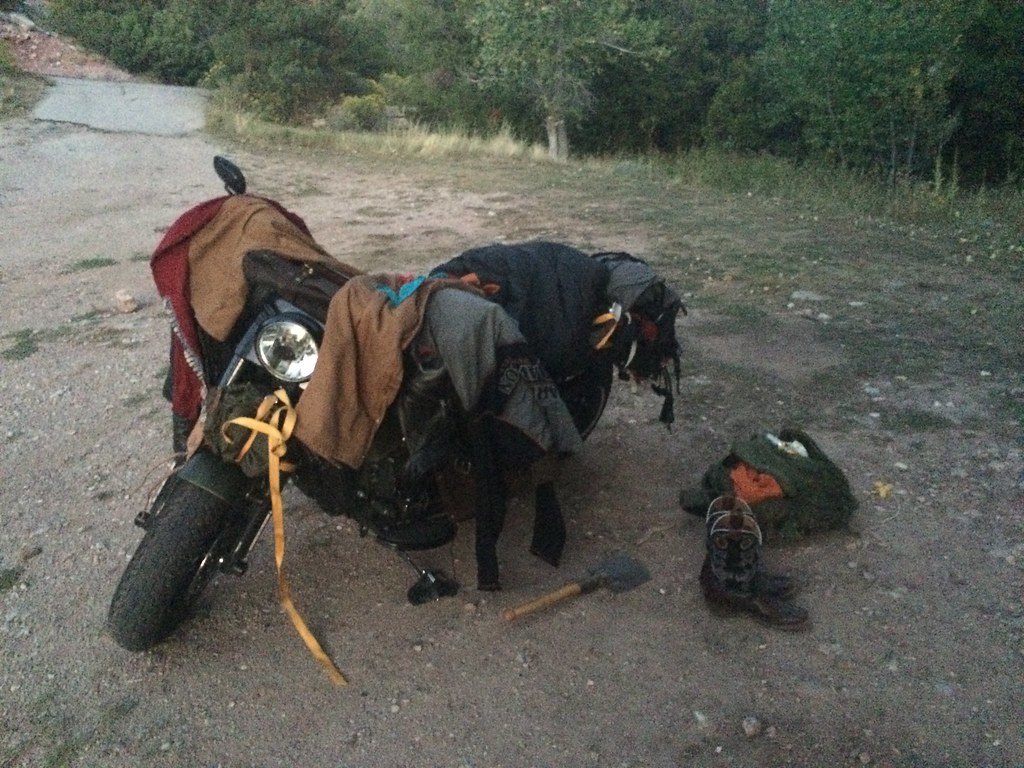 The parking spot doesn't look like much, but here's a view in the other direction: 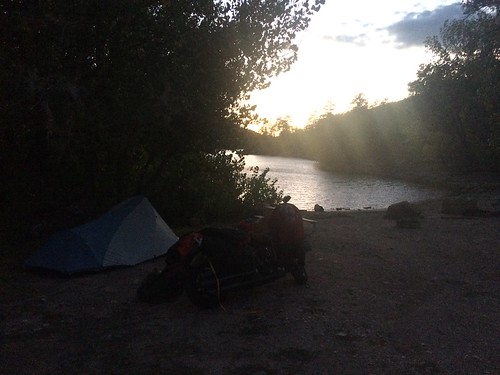 I had an amazing trip. Truly the best 3,600 miles I'd ever traveled using any mode of transport. After resting up for a day at home, I wanted to turn around and do it again. Since this indicated I was completely hooked, my task that winter was one and only one thing: starting from scratch with the whole packing thing, applying everything I'd learned, and coming up with a solution that met a list of requirements I'd been putting together.

A successful bag configuration would allow me to:

I got hung up on saddlebags for a while, and when no solutions presented themselves to my satisfaction, I set that particular part of the problem aside to focus on other, more general bag arrangements. Eventually, I zeroed in on those that could be done on top of one or more of the fenders. After several false starts, I began to seriously explore the MOLLE route, and with that the solution was near. It turns out MOLLE on the bike works just as well as it does for soldiers in the field (and it's WAAAAAY better than the damn ALICE clips we had to use when I was in the Army). Being able to securely fix multiple bags together in changeable configurations really got me where I needed to be.

I quadruple-checked my measurements and began to order bags, one at a time. One reason for this approach was not wanting to go all-in to what could potentially have been a costly mistake. Another reason was also practical, but in a different way: I wanted to make sure each bag could stand on its own and didn't depend upon one or more of the others, just to be useful.

A each bag checked out in flying colors, I made the final purchase and then spent a couple of hours down at the hardware store getting more bolts, nuts, washers (metal and rubber). The end result was ready in time for a 3-day, 2-night test ride through Minnesota, North Dakota, and South Dakota: the 2017 Dam Ride. The time and thinking paid off: 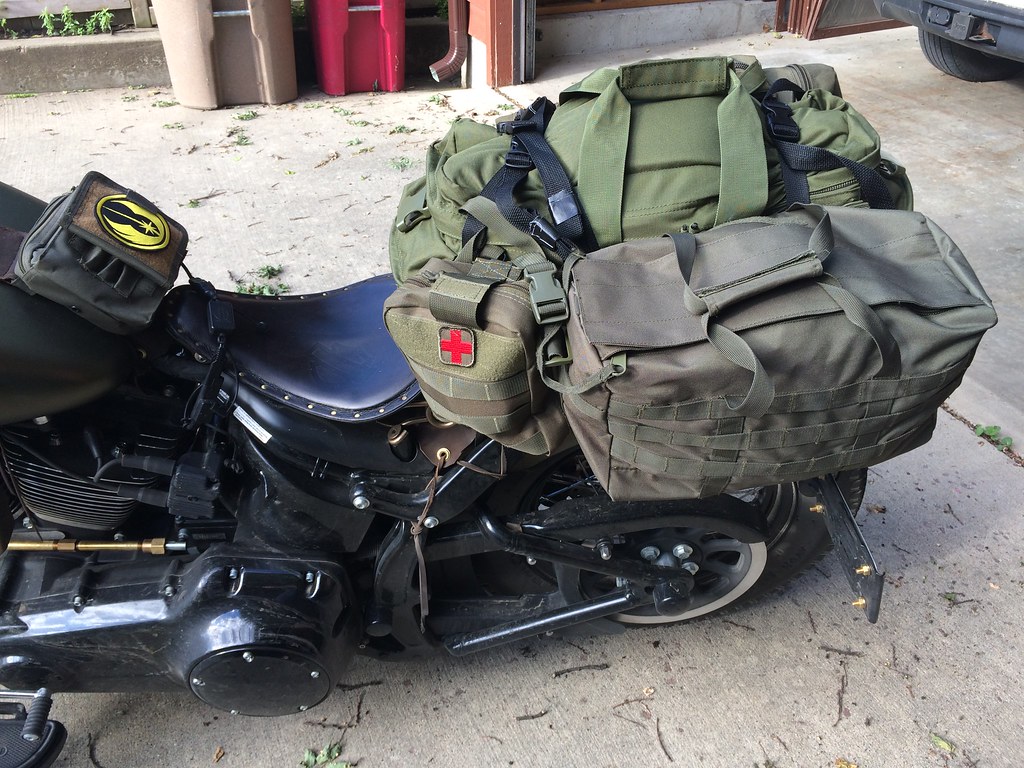 That looks a little bit messy only because it's all tied down, cinched-up, and wrapped around itself, ready for the ride. Here's another shot: 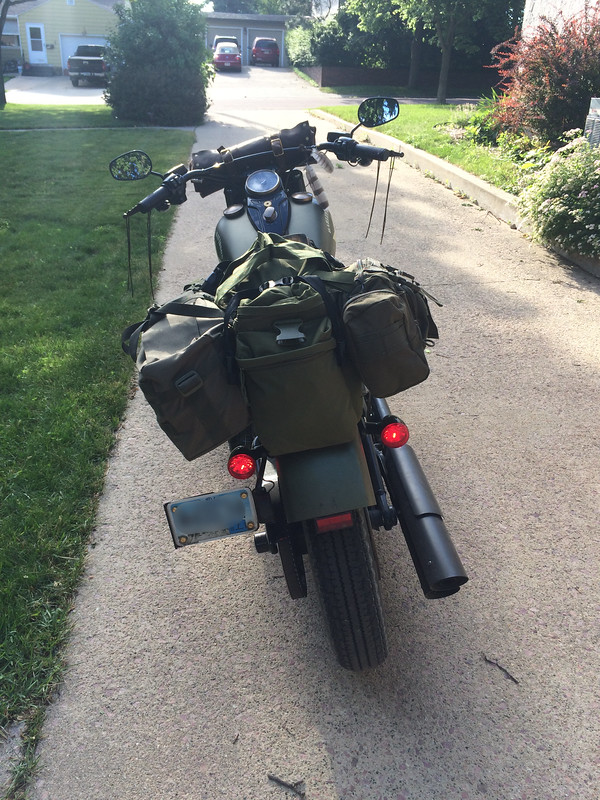 Even though the bags acting as panniers are different sizes, the one on the left held lighter supplies, so all three bags remained balanced on the fender (which also being strapped down, of course).

This rig consists of the following:

Not pictured, but also used for 3L of water, some snacks, and additional items:

This bit was a bit tricker. Here's what I did:

With the central bag tightened down, the panniers were ready to be attached using MOLLE straps.

Teardown was easy, but that was also when I discovered that during the 3-day ride, I'd bent the rear bolt and warped the fender a bit at the bolt hole. I've since purchased some steel I'm going to drill some holes in, do some primitive fabrication to curve it in the same way as the fender, and use some different washers for reinforcement.

Packing with the Bags

Here's an inside-look at some of the bags (the deployment bag on the other side was full of googles, gloves, bungee cords/nets, etc.): 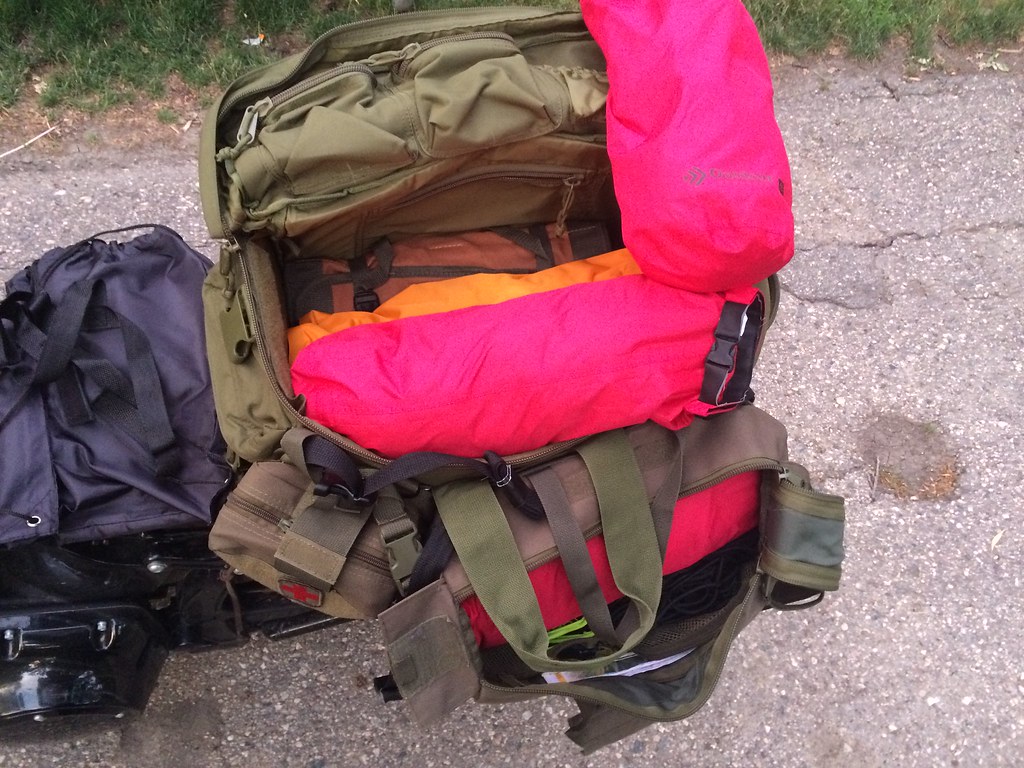 The tool wrap is there at the bottom (separate 5-star blog post coming for that guy!), and most of everything else is a collection of weather-proof bags of varying sizes where all the clothes went. You typically see these bags in camping/adventure stores where kayakers and canoers go. I'm glad I ran across them, because they really changed everything for me. (I think the three red small ones I picked up at Walmart where I was getting last-minute supplies.)

As great as the Fox tactical bags were for carrying my stuff, these dry bags were the secret sauce for perfect packing. Pros include:

Due to the limitations in volume and number, they really forced me to exercise good packing practices and the results were felt throughout the ride. This is how I want to do it from now on.

Last but not least, here's a look inside the first-aide kit: 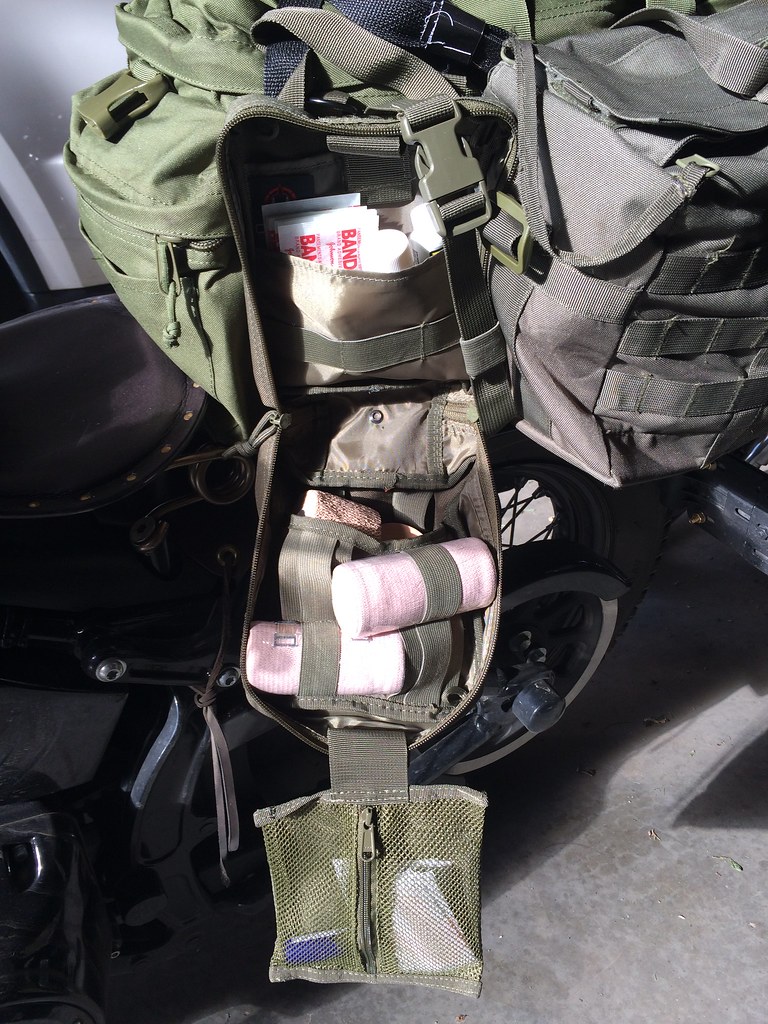 Fortunately nothing there was needed, but the design is so fantastic for quick access to medical supplies that I never unpack it, using it like you see here at home, on hikes, and on rides.

Strapping unneeded clothing and the helmet to the packs was easy and stable, perfect for cruising around the campground. Pulling over into a campsite, setting up the hammock, unpacking for the night, accessing toiletries, etc., with this bag arrangement was a dream: 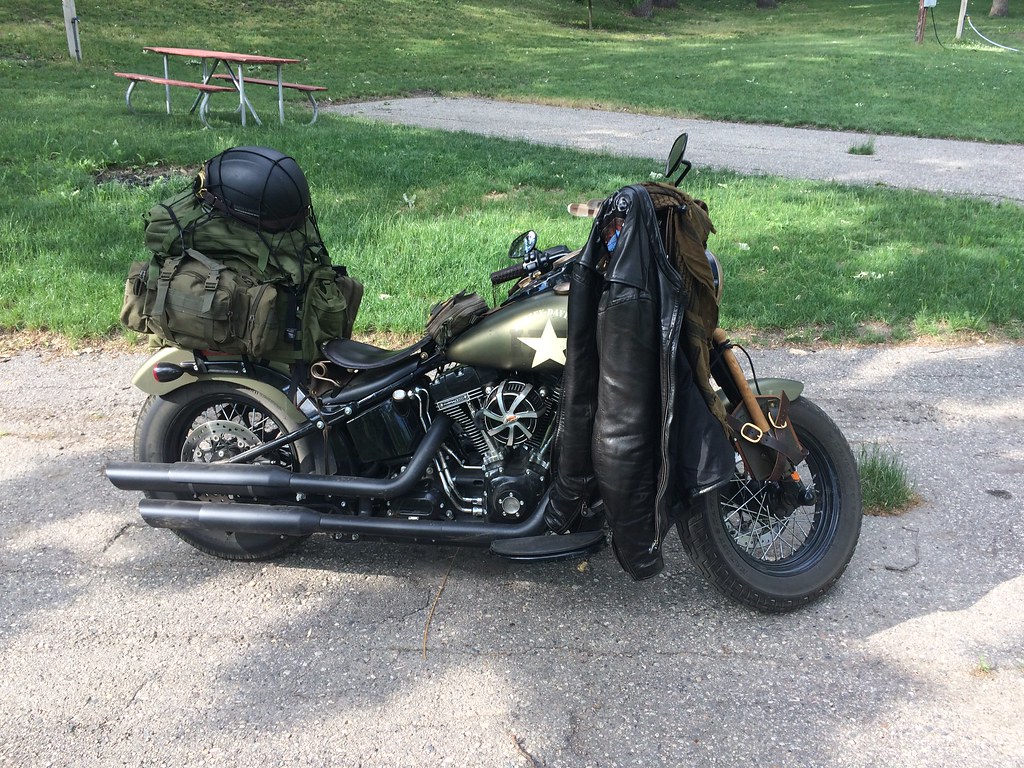 Such a different experience from last year's big ride!

Update: Here's another bag I'm looking at, different brand ... and it's REALLY growing on me. Might have to get two of these: SHANGRI-LA Tactical Assault Gear Sling Pack Range Bag with Shoulder Strap - Army Green

Resizing: for 2-3 days rides, the left-side operator bag was a bit too large; conversely, the right-side deployment bag was a tiny bit too small. I'd also like them to be the same size, so I'm thinking of going this route next time:

For 4-7 day rides, I'd swap those out (keeping the large central "gear" bag) for something bigger than the operator's bag with the canyon zipper (nice, but better as a small carry-on when flying):

With both the jumbo deployment bag as well as the modular equipment bag, you get smaller zippered compartments at both ends. These are my most-used pockets during an actual ride, where I keep things like extra gloves (important when riding in altitude), goggles for day/night, hats for stopping, changes of socks, sunscreen, bug spray, additional snacks, etc.

I haven't come up with a good solution for the front of the bike yet. For last year's trip, a strapped the small deployment bag (the one I used on the right this year) between the forks in the front, but this arrangement was unstable. If I can't find a fender+fork frame for attaching bags, I might just have to fabricate one myself.

In the event that this does happen, I'm pretty sure the bags I'll use here will be two of the canyon-mouthed operator bags (used on the left this year). Zippered pockets on the side are a pain when low like the bags would be here, so a single wide top-entry opening would be perfect. I would probably put the tools there, as well as other less-often used and heavy items (road flares, large flashlight, extra batteries, spare cables, extension cords, etc.)

The Return of the Saddlebags

I like to do my own leatherwork when I can. The large forkbag where I keep my rain gear was fun; the sheath and strap for the entrenching tool, likewise. I've got a vest and new chaps in the works (both buffalo hide). But the next large project is going to be the saddlebags.

Now that I've used the other bags on rides, I know the size and placement of the saddlebags I will design and build – and I will do so for use in conjunction with the bags mentioned in this post. This will extend my riding capabilities by about 1 to 1.5 weeks. Then add a luggage rack and some fasteners for the sleeping bag, tent, and Therma-Rest ... well, you might not see me for a while ;-) 🛣

Bags from this Article

(Purchases from the links above help support Forgotten Roads -- if you buy something, thanks :-) Regardless, thanks for reading!)